Echinacea Root and Plant is advertised as a natural supplement which was specifically designed to maintain the health of the organism by providing antioxidants, as well as other nutrients which are needed for a proper functioning. The business which manufactures and distributes this product on a national scale is named Botanic Choice.

Established in 1910 by Joseph Meyer, who had a curiosity related to herbs from a young age, it is headquartered in Indiana. After his founder died, the company was left to his grandson David Meyer and his great-grandson Tim Cleland. Nowadays, it produces and distributes a large number of products whose beneficial effects are linked to nervous, immune, skeletal, and cardiovascular systems, but also weight-management, as well as other bodily issues of the contemporary world.

Containing two herbal extracts, this formula actually features the equivalent of twenty milligrams of total phenols and is destined for the use of people who have bad immunity, thus often catch colds or those who just want to lower effects of aging or stressful activities throughout the day. As compared to other remedies of the same type, Echinacea Root and Plantis free of alcohol and has a nice taste, it’s easy to use by mixing it with water, juices or in some cases, yogurt, or milk.

1) Botanic Choice Echinacea Root and Plant at a Glance

Advertised as an additional remedy for individuals who already have a healthy lifestyle or just want to boost energy levels, Echinacea Root and Plantcontains two different extracts which are obtained from different Echinacea types. These are Angustifolia and Purpurea.

Evidence revealed that the Purpurea species possesses antidepressant properties and also improves the action of L-DOPA. L-DOPA is actually the precursor of neurotransmitters including epinephrine, norepinephrine, and dopamine which are used for treating medical conditions like dopamine-responsive dystonia or Parkinson’s disease. Moreover, there are some people who believe that the qualities of this herb are also related to the immunity system and may in fact prevent or treat some colds or local infections.

Echinacea Root and Plant contains the following ingredients: E. Angustifolia and E. Purpurea Tops/Root (both at 1:1).

Presented as an additional supplement for those who lead a healthy lifestyle or just desire to enhance their energy levels, Echinacea Root and Plant features two different extracts obtained from different Echinacea species. These are Purpurea and Angustifolia.

Evidence showed that the Purpurea type possesses antidepressant qualities and also enhances the action of L-DOPA. L-DOPA is the precursor of the neurotransmitters epinephrine, dopamine, and norepinephrine, components which are utilized for treating medical conditions such as dopamine-responsive dystonia and Parkinson’s disease. Furthermore, some individuals think that the benefits of this herb expand all the way up to the immunity system and may represent a natural alternative for avoiding certain infections or inflammations.

The Angustifolia type has a positive impact when it comes to pain caused by toothaches and colds and provides relief for them. Although it is less known than Purpurea, this type has been traditionally used by Chinese people. Thus Ayurvedic medicine has had a contact with it for ages. On the other hand, a long-term utilization of this combination is yet to be certified, and some side-effects may appear such as headaches or diarrhea. However, there depend on the intake and the sensibility towards plants of the individuals who are consuming it.

This product is sold in a liquid form through bottles that feature 30 ml. Because the daily suggested intake is of 14 to 28 drops which mean ½ to 1 milliliters for three times, a bottle may last for up to ten days of treatment. However, this depends on the preferences of the customer and the way he or she consults this consumption with a personal doctor. Overall, the price is viewed as moderate and can be afforded by every individual who is making at least minimum wage. International shipment is offered through some online distributors, and if the costs are too high, a person may decide to order from other websites.

On the other hand, Angustifolia species possesses a positive impact linked to pain determined by toothaches and colds and usually offers relief for them. Even though it is less known than Purpurea, this species has been long utilized by Ayurvedic medicine and in most situations, came with good results. Unfortunately, insufficient information about the long-term use of this herb has been provided so far, thus pregnant or nursing women are advised to seek the advice of a personal doctor prior to taking this supplement. In case any harmful effect appears, the treatment should be stopped.

Advertised as a daily means of improving immunity, health, and resistance against oxidative damage, Echinacea Root and Plant is an herbal supplement made out of two different species of Echinacea. It possesses some scientific certification, as well as a more detailed approach from a scientific point of view on the manufacturer official webpage. On the other hand, it is important that people with known allergies and nursing or pregnant women consult a doctor prior to its use in order to avoid possible side-effects. Furthermore, in order to obtain better and faster results, a healthy lifestyle should be lead alongside the use of this product. 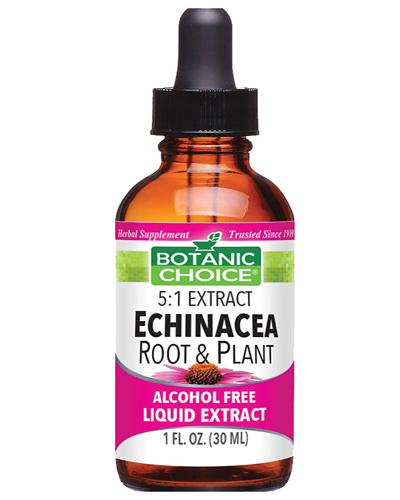 clear
Q:
What are the core ingredients in Botanic Choice Echinacea Root and Plant?
A:

Echinacea Root and Plant includes the following ingredients: E. Angustifolia and E. Purpurea Tops/Root (both at 1:1).

Q:
Botanic Choice Echinacea Root and Plant is all about what?
A:

All in all, Echinacea Root and Plant represents a dietary remedy whose consumption should be done on a daily basis in order to obtain desired results. It focuses on enhancing the immune system, as well as resistance towards oxidative damage. Therefore, during the treatment, people should notice an increase in protection against colds, flus, or other types of infections or inflammations. It consist of two ingredients with scientific studied properties.

Q:
Are Botanic Choice Echinacea Root and Plant benefits actually a reality?
A:

Promoted as a daily enhancer of healthy, immunity and resistance towards oxidative damage, Echinacea Root and Plant represents an herbal remedy composed of two different types of its main component. It comes with some scientific certification and a more detailed presentation of its benefits as compared to some other remedies from the same company. However, pregnant or nursing women, as well as individuals who are allergic or hypersensitive to some plants, are advised to consult a personal doctor before thinking of following this treatment because some unwanted effects may appear. To obtain faster and better results, a person should think about taking this supplement in combination with a healthy lifestyle.

No way i could believe a product can help me with my colds.. but here it is.

I have some heart problems and I usually tend to catch the weirdest diseases there are, but since I’ve started taking this, things have improved a little bit.