Mommys Bliss Apple Gripe is an herbal supplement for babies, which aims to ease gastrointestinal discomfort associated with colic, teething pains and hiccups. The product is manufactured by Mommy’s Bliss.

Mommy’s Bliss is a company founded in 1999 in US by Roshan Kaderali. She has experience as a nurse, lactation consultant and a midwife. The company also manufactures baby massage cream, wash and mist, and a relief solution for upset tummy and nausea. All the ingredients used are naturally derived, hypoallergenic and BPA-free. BPA is an organic compound primarily used to manufacture plastics (like packaging) which can disrupt the endocrine gland by mimicking the effect of a certain hormone. This may negatively affect your health.

According to the manufacturer, Mommys Bliss Apple Gripe is 100% vegan, and it contains a higher concentration of active ingredients versus other grape waters. Moreover, it is based on organic ginger and fennel extracts, two herbs widely known for their use in stomach ailments. In addition, it does not contain harsh chemicals or artificial flavors or coloring.

The product should not be given to premature children or babies weighing less than seven pounds, unless there is a doctor prescription.

Medical supervision is required if the child’s family has a history of kidney failure, renal and heart problems or food allergies. In addition, if the child becomes more irritable or experiences a rash, a doctor should be consulted.

1) Apple Gripe at a Glance

Mommys Bliss Apple Gripe is aN herbal supplement for babies with stomach and intestinal ailments, as well as teeth pains. All ingredients are on the FDA’s “Generally Recognized as Safe” list.

The main active ingredient is Sodium Bicarbonate, together with Fennel and Singer. Sodium Bicarbonate, also known as baking soda, is usually used against excess stomach acid (leading to indigestion and the feeling of heartburn). Side effects in babies may include hydration and pH problems. It may also impede with Folic Acid and Iron absorption, which can affect metabolism and growth.

Another active ingredient is Fennel Seed Extract. Fennel is an herb used for digestive problems, like baby colic, bloating, loss of appetite and in some respiratory diseases and eye problems. There are some clinical studies which have concluded that Fennel Extract plays some role in relieving colic symptoms. One side effect is that it might cause an allergic reaction in individuals who are allergic to celery, carrot or mug wort.

There is not any scientific research proving the efficacy of the Mommys Bliss Apple Gripe formula or gripe water in general. Despite this, gripe water is one of the most popular products administered to babies against digestive problems. According to the manufacturer, the quantity of sodium bicarbonate in the product is minimal (one 5 ml serving accounts for less than 1% of the daily recommended amount for babies 1 to 6 months old). Therefore the risk of side effects due to this ingredient is negligible.

It should be noted that in 2007, FDA warned consumers against consuming products from a sample of Mommys Bliss Apple Gripe after it detected the cryptosporidium intestinal parasite in it. This parasite can cause dehydration, nausea, vomiting, drop in weight and can be quite dangerous. The distributor voluntarily recalled the potentially contaminated products. However, this was a one-time occurrence.

The manufacturer recommends a dose of 1/2 teaspoon (2.5 ml) for babies 2 weeks to 1 month old, 1 teaspoon (5 ml) for babies 1 to 6 months old, 2 teaspoons (10 ml) for children six months of age or older, and 2 tablespoons (30 ml) for adults. Mommys Bliss Apple Gripe may be taken up to 6 times in 24 hours. The formula is liquid and comes in a bottle of 4 fl. oz. The container should be discarded one month after opening. For instance, there are 24 servings per container for an infant 1 to 6 months of age.

3) What Does Apple Gripe Do?

Mommys Bliss Apple Gripe Water is an herbal blend especially developed for babies, although it can be used by adults as well. Its aim is primarily to ease gastrointestinal problems and teeth pains. Sodium bicarbonate (baking soda), fennel seeds and ginger roots are its main active ingredients. Sodium bicarbonate is effective in lowering stomach acid but might sometimes cause pH balance problems and affect hydration. Fennel is useful for the treatment of colic symptoms as shown by some scientific studies. We recommend people with an allergy to celery or carrots to ask for a medical opinion before taking products based on fennel. Ginger is also a herb traditionally used against colic and constipation.

Scientists have not researched the formula behind Mommys Bliss Apple Gripe Water. However, gripe water, in general, continues to be a very attractive solution for baby colic. According to the manufacturer, side effects caused by the amount of sodium bicarbonate in the product are small as the quantity of bicarb in one 5 ml serving is minimal (it represents less than 1% of the daily recommended dose for 1-6 months old infants).

The manufacturer provides very clear directions for the use of Mommys Bliss Apple Gripe Water. Babies 2-4 weeks of age should be administered 1/2 teaspoon, infants 1-6 months of age should be given one teaspoon, while children more than six months old should receive two teaspoons. Adults, however, can take two tablespoons at once. There should be six servings at most per 24 hours. One bottle of 4 oz should thus cover 24 servings for a baby 1 to 6 months old.

We would also like to mention that a sample of Mommys Bliss Apple Gripe Water was recalled by a distributor in 2007 and FDA warned against consuming the bottles in the sample. This was because an intestinal parasite was discovered in the sample (called cryptosporidium). This parasite may cause dehydration, nausea, and vomiting and may be very dangerous for infants.

Mommys Bliss Apple Gripe Water should not be administered to too small babies (less than seven pounds) or to babies that were born prematurely unless there is a medical prescription. Also, usage should be discontinued in case of sudden rashes or severe changes in the baby’s mood. Moreover, caution is required if there is a history in the family’s child of heart or renal problems, kidney failure or some food allergies.

There are online testimonials about Mommys Bliss Apple Gripe. What it has been reported includes:

Mommys Bliss Apple Gripe Water sells for an average priced compared to other gripe water products based on natural ingredients. The manufacturer, Mommy’s Bliss, offers coupons allowing you to save 1$ on the purchase (they can be redeemed and printed from the manufacturer’s website). Also, you can enter your zip code on the manufacturer’s website, and they tell you where you can find stores with Mommy’s Bliss products in your area. The product is easily obtainable at retailers as well as in online stores.

The product should not be given to premature children or babies weighing less than seven pounds, unless there is a doctor prescription. Moreover, medical supervision is required if the child’s family has a history of kidney failure, renal and heart problems or food allergies. In addition, if the child becomes more irritable or experiences a rash, a doctor should be consulted.

8) Our Verdict on Apple Gripe

Mommys Bliss Apple Gripe is a gripe water especially developed for children (although it can be used by adults as well) with digestive problems, and generally used against colic. It contains only natural ingredients which are all on the FDA’s “Generally Recognized as Safe” list. However, the formula does not require an FDA evaluation, since it is considered a dietary supplement. Although scientific studies have not proved the effectiveness of gripe water on children, gripe water remains one of the most popular products against colic. Mommys Bliss Apple Gripe itself has received many positive customer reviews. Side effects might appear (like nausea, rash) as the babies’ immune systems are not well developed, therefore caution is required when administering the product for the first time. 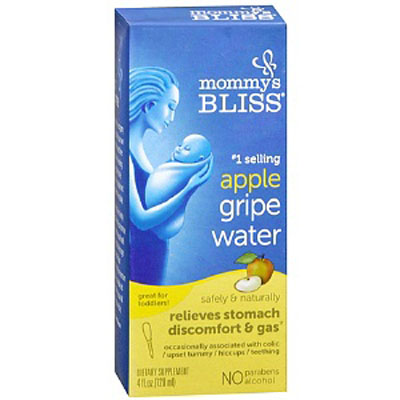 clear
Q:
What are the Apple Gripe ingredients?
A:

Q:
What is Apple Gripe supplement?
A:

Mommys Bliss Apple Gripe is an herbal supplement for babies which aims to ease gastrointestinal discomfort associated with colic, teething pains, and hiccups. The product is manufactured by Mommy's Bliss. Side effects might appear (like nausea, rash) as babies' immune systems are not well developed. The product should not be given to premature children or babies weighing less than seven pounds, unless there is a doctor prescription. Moreover, medical supervision is required if the child's family has a history of kidney failure, renal problems, heart problems or food allergies.

Q:
Does Apple Gripe work?
A:

Mommys Bliss Apple Gripe Water is a liquid herbal supplement used against baby colic, hiccups, and teething pains. It is fast acting, and all the ingredients are naturally derived. The efficiency of the formula has not been studied by scientists however gripe water, in general, is quite often used by parents needing to soothe their babies. Also, there are many positive customer testimonials, which should be a proof that that product works. We recommend Mommys Bliss Apple Gripe Water to be taken under medical supervision because babies may experience allergic reactions (such as rashes and nausea).

I\’ve tried several brands and this one is the best. It works for a 10 yr old too!

This product is great! I have been using Mommys Bliss Apple Gripe for both my children. It\’s the best for tummy aches, gas and hiccups.