Antioxidant Extreme is advertised as a broad spectrum, effective antioxidant formulation. The manufacturer Health Force claims the combination of ingredients results in a formulation with a high ORAC (oxygen radical absorbance capacity), an artificial index that measures antioxidant strength. The core benefits of the formula derive from its ability to fight free radical damage and include support for anti-aging and normal cell division, rejuvenation and prevention of degenerative disorders related to oxidative stress.

Health Force has been established in 1990 by a naturopath and a holistic medicine practitioner. The company manufactures today a wide variety of green foods based on ingredients such as Spirulina or Chlorella, supplements, cleansing and detoxification formulas, and sports nutrition.

The formula is recommended to be used by adults. Antioxidant Extreme is suited for vegetarians.

Turmeric is in the top 10 antioxidants with the highest ORAC score. It is a bright yellow spice, long used by the Indian and Chinese systems of medicine as an antioxidant and an anti-inflammatory agent. Scientific evidence links frequent use of Turmeric to lower rates of certain types of cancer (prostate, lung, and colon), lower incidence of viral infections, heart failure, cholesterol, osteoarthritis, and cognitive decline which may lead to Alzheimer’s disease or dementia. Additional benefits include the management of stress and depression related disorders and may reverse the effects stress has on behavior, cognition and memory.

Green tea is also known for its antioxidant effects, due to a concentration of polyphenols. Green tea’s medicinal benefits are based on limited scientific evidence. These assumed benefits include the ability to improve memory and prevent or low down memory and cognitive function degeneration Alzheimer’s disease and Parkinson’s disease. Side effects are rare and usually include upset stomach and constipation.

2) What Are Antioxidant Extreme Ingredients?

Antioxidant Extreme is a blend of herbal and fruit extracts. Acai has received much attention as one of the most powerful antioxidants available in nature. The ORAC value of ACAI is 102,700, with the highest ORAC value exiting. Scientific research is limited, however. Acai has been linked to conditions for which oxidative stress may be responsible. There is evidence that Acai may potentially prevent or delaying the onset of cognitive impairment conditions (Alzheimer’s, Parkinson’s disease, or dementia), memory loss in the elderly, heart conditions, etc. The plant’s neuroprotective properties may account for its content of essential fatty acids Omega-3, 6 and nine which are shown to contribute to a boost in energy, brain health, mood, behavior, and heart health.

Resveratrol is also a very much praised antioxidant. It has been the topic of a vast number of human and animal studies, although evidence is needed to substantiate most of its benefits claims. So far, Resveratrol has proven encouraging results in heart disease prevention, cancer, and diabetes prevention and as a neuroprotective agent. Particularly, the substance may fight neuronal cell dysfunction and cell death, hence contributing to preventing Huntington’s disease or Alzheimer’s disease.

The manufacturer recommends taking a maximum dose of 4 tablets a day. There are testimonials posted online about Antioxidant Extreme.

6) How Much Does Antioxidant Extreme Cost?

The formula comes into 360 tablets bottles. At a maximum four tablets a day dose, one bottle should last roughly three months. The price for one bottle is almost $90, which makes a month’s supply cost roughly $30. This price is slightly higher than similar products; however, this combination of ingredients is not a common one. The product is available with online retailers and in stores all across the United States and Europe. You may consult the complete list of distributors on the manufacturer’s official website.

Oxidative stress and free radical damage has been a highly debated topic for quite some time. Their implications on overall health as well as on specific body functions or systems are heavily investigated. Antioxidants are seen as an “antidote”; hence, their study enjoys just as much popularity. From Resveratrol to Goji berries, more and more supplements advertise the wonders of antioxidants. Antioxidant Extreme is claimed to be a formula with potent effects and one of the highest ORAC scores existing. Although the formula includes ingredients which have received a high Oxygen Radical Absorbance Capacity (ORAC) score, it did not receive many consumer reviews; hence, it is difficult to assess its effectiveness in the advertised benefit areas and make a clear recommendation. We advise that you further investigate the formula with a specialized healthcare professional.

Antioxidants are also sometimes included in weight loss supplements. If you’re interested in how antioxidants help burn fat, we recommend checking out our Xyngular Review. 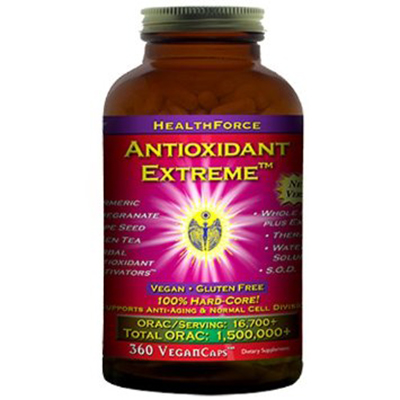 clear
Q:
What are the core ingredients in Antioxidant Extreme?
A:

Q:
Antioxidant Extreme is all about what?
A:

Antioxidant Extreme is advertised as a powerful antioxidant and one of the highest ORAC (oxygen radical absorbance capacity) products available. The formula manufactured by Health Force is claimed to assist with aging and normal cell division, while rejuvenating and helping the body recover. The formula features powerful natural antioxidants such as turmeric, Resveratrol, pomegranate, Goji berries or green tea and may be able to lower the risk or prevent conditions related to oxidative stress (cognitive decline, Alzheimer', stroke, arthritis, etc).

Antioxidant Extreme is claimed to deliver minimum 16,700 ORAC per serving, a powerful antioxidant intake which will fight aging processes and related ailments. The manufacturer, however, brings no actual evidence to support the bold claims it makes regarding the benefits of the formula. Consumer reviews are limited in number, and hence, in the absence of any objective evidence to support these claims, they represent mere marketing messages. It is our recommendation that you talk to a specialist before starting using this dietary supplement.

Antioxidants are great and this seems like a really great product if it does what’s advertised. I’ve been only taking it for a couple of weeks; I’ll let you know how it goes.

I have been so stressed out lately that my doctor recommended me taking some supplements for overall strength so that I won’t get sick. I took Antioxidant extreme for 2 or 3 days before starting feeling extremely energized and emotionally balanced. I’ve been taking them ever since.