Brain and Memory Power Boost is advertised as a revolutionary new approach to ensuring optimal brain function and memory revitalization. Among the core benefits of the formula we mention healthy memory, cognitive clarity, mental focus and sharper thinking, although no clear evidence is brought to support these claims. According to the manufacturer, the formula was developed by the neuroscientist, board certified psychiatrist and brain imaging expert Dr. Daniel Amen.

The product is designed for adults who seek mental clarity, enhanced memory capacity and increased concentration power, regardless of age.

Dr. Amen is also the man behind BrainMD Focus and Energy, a nootropic that has anti-stress ingredients.

Ginkgo Biloba, one of the formula’s core ingredients, is most used for its neuro-protective, blood flow enhancing and antioxidant properties. Scientifically proven to enhance circulation, Ginkgo Biloba is often used for its potentially beneficial effects on health issues caused by or related to poor circulation, such as impaired memory and concentration capacity, headaches, mood problems, hearing problems, legs and hands problems. Side effects are minor and rare and include upset stomach, dizziness, headache and forceful heartbeat. Also, there is concern that it might increase the risk of bruising and bleeding, since it thins the blood.

Acetyl-L-Carnitine is involved in the synthesis of acetylcholine, an important neurotransmitter, but it is also known for its powerful antioxidant properties. It is currently researched for its neuro-protective properties results so far indicating that it may slow the decline in cognition, mood, and daily function that occurs with age.

The manufacturer mentions no potential side effects associated to the formula, however individual ingredients have been linked to adverse effects under certain conditions. Consumer reviews are not available; therefore we cannot make a fair assessment of its effectiveness.

3) Is Brain and Memory Power Boost Right for You?

Promoted as a memory and brain booster, Brain and Memory Power Boost contains a combination of ingredients known for their benefic qualities and which are usually used in dietary supplements. One of these ingredients is Ginkgo Biloba. Evidence has shown that Ginkgo Biloba is an extract from one of the oldest living tree species that has been used medicinally in North America, where it’s one of the most popular medicinal herbs, as well as other countries around the world. Among its properties are improving memory, helping with people who have Alzheimer’s disease, enhancing blood circulation, as well as helping with peripheral artery disease. However, constituents in ginkgo leaves are believed to contain compounds that may affect blood clotting; thus, it shouldn’t be used with people with bleeding disorders. This supplement should also be avoided by people with epilepsy, diabetes, or pregnant or nursing women.

Another ingredient of Brain and Memory Power Boost is Acetyl-L-Carnitine, an amino acid that helps the body produce energy. It is used for a variety of mental disorders including age-related memory loss, late-life depression, thinking problems related to alcoholism as well as reduced circulation in the brain, cataracts, and nerve pain because of diabetes. Acetyl-L-Carnitine helps with the production of energy; therefore, it is important for heart and brain functions, muscle movement and many other body processes. However, consumption of this amino acid is likely safe for most adults because it can cause some adverse side effects including stomach upset, nausea, vomiting and restlessness.

There is no sufficient online information regarding the Effectiveness of this product; its quality can’t be guaranteed.

5) Precautions of Brain and Memory Power Boost Use

Brain and Memory Power Boost is sold by bottles containing 90 capsules that should be sufficient for a month treatment. Its price can be considered expensive, especially in comparison with similar products from different companies. Found for purchase on manufacturer website as well as other retailers, Brain and Memory Power Boost can be bought in larger quantities at lower prices.

7) How to Use Brain and Memory Power Boost

The recommended daily dosage of Brain and Memory Power Boost is one to three capsules per day or as directed by a healthcare professional.

Brain and Memory Power Boost is a mixture of seven amino-acids and plant extracts blended in a formula designed by one of the world’s most prolific neuroscientist, psychiatrist, brain imaging specialist in the world, Daniel G. Amen MD. The formula, however, is not clinically tested nor is any research provided to support the benefit claims or its effectiveness. Still, the product is accompanied by a 100% money-back guarantee that covers full refund of purchase price, time frame not specified.

Given that some of the ingredients may cause side effects and may interact with other medication, even if mild, it is our strong recommendation that a pharmacist or a healthcare professional is consulted prior to starting treatment. 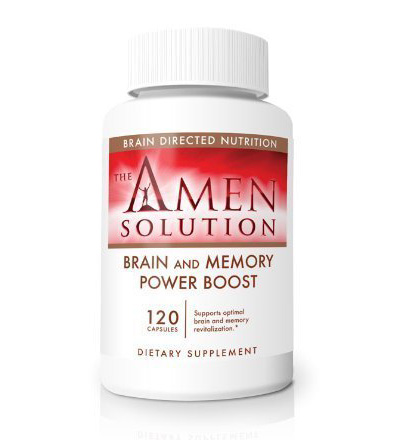 clear
Q:
What are the core ingredients in Brain and Memory Power Boost?
A:

Q:
What is Brain and Memory Power Boost supplement?
A:

Brain and Memory Power Boost is advertised to be a supplement that aims to support brain health. The company that produces this formula is called Amen Solutions and is situated in the United States. Brain and Memory Power Boost uses ingredients such as Acetyl-L-Carnitine, Ginkgo Biloba extract or Alpha-Lipoic Acid in order to act as a potential support for memory, mental focus or cognitive function.

Q:
Does Brain and Memory Power Boost work?
A:

Combining the effects of herb extracts, amino acids, and fatty acids, Brain and Memory Power Booster claims to be able to help people with memory problems as well as those who want to improve their mental clarity, mental focus or just feel sharper. It contains ingredients usually used in dietary products for mind enhancing. However, there are insufficient online testimonials and studies regarding the Effectiveness of this remedy.

Brain and Memory Power Boost's usage may lead to some unwanted side effects, and if any of these occur, the consumption should be immediately stopped. For good results, this remedy should be combined with a healthy lifestyle.

I was lucky to find this product.

I took it for two months. I don’t remember how many pills a day. I didn’t notice and effect.