Graviola is an organic extract of the rainforest plant Annona muricata commonly known as Graviola. The formula is recommended as a tonic. The website of the manufacturer, Amazon Therapeutic Laboratories is not available at this time. However, it seems they offer special attention to preserving the natural resources and the rainforest by sustainable harvesting.

There is not much information about this formula’s purpose, but research shows Graviola possesses a wide range of medicinal properties and has been used for hundreds of years in traditional medicines in numerous parts of the world. Graviola is based on a mix of Graviola and alcohol which helps preserve the formula’s integrity.

Graviola, a rainforest plant used for medicinal purposes in Central and South America, is now a very popular natural remedy all around the world. Different parts of the plant are used to treat specific illnesses. For example, the fruit is believed to reduce fever, treat diarrhea, and kill intestinal parasites. The bark is used as a sedative and antispasmodic and to speed healing of wounds. Other uses refer to its ability to reduce blood pressure, treat digestive problems, colds and flus, reduce symptoms of asthma, reduce inflammations in the joints, and even increase lactation. Research also supports its antiviral, antirheumatic, antiparasitic, and emetic (a medicine that induces nausea and vomiting) qualities. Graviola extracts have also been used to treat mood problems and reduce stress symptoms. For exerting mood enhancing benefits, Graviola is traditionally combined with a bark of another rainforest tree (Mulungu).

Graviola’s anticancerous benefits have also been explored by modern medicine. Researchers believe that the plant has the ability to distinguish between cancerous cells and healthy ones because cancer cells have a much higher level of cellular activity. Active compounds from Graviola called acetogenins recognize and inhibit the growth of these cells, leaving the healthy ones unaffected.

3) Is Graviola Right for You?

As stated above, Therapeutic Laboratories Graviola is a single herb extract of the leaf of the South American evergreen Graviola. The product is advertised as 100% natural with no additive or other potentially dangerous chemicals into its composition.

Besides preventing various health concerns, the extract also acts as a mild sedative to calm the nerves, alleviate depression and lower your blood pressure. In fact, many practitioners believe that Graviola may be more efficient in treating depression than prescription drugs like Zoloft, Paxil, Prozac or Effexor.

With all these health benefits, there is no wonder that more and more pharmaceutical companies have turned their attention to this mysterious tree. The plant appears to be safe to use with no reported side effects (although its long-term effects are still unknown).

It is important to note that this formula is not unique. Some different manufacturers are offering similar products. Graviola-based supplements can appear in the form of powder, tablets, capsules or tincture, but the formula is almost identical in all these cases.

There are testimonials about Therapeutic Laboratories Graviola posted online. What is being reported includes the following:

The supplement can be purchased online securely from numerous retailers. There is no money-back guarantee and no free trial sample, but the low price should give people the possibility to try it relatively risk-free.

Like almost all herbal remedies, Graviola use has been associated with certain side effects such as nausea and vomiting (when used excessively) and low blood pressure (which becomes dangerous in people who already suffer from hypotension). Graviola should not be combined with co-enzyme Q10 as they cancel each other’s effect. Namely, CoQ10 increases ATP (Adenosine Triphosphate) levels while Graviola has been shown to reduce the levels of ATP.

8) Our Verdict on Graviola

Graviola is a single ingredient supplement designed to support human health under various aspects. Besides its tonic properties, the supplement should also improve mood, reduce stress levels, and promote optimal immune function in healthy individuals. Unfortunately, a daily recommended intake has not been established, so please ask your doctor prior to starting using the formula. Some adverse reactions and interactions with other substances have been reported. 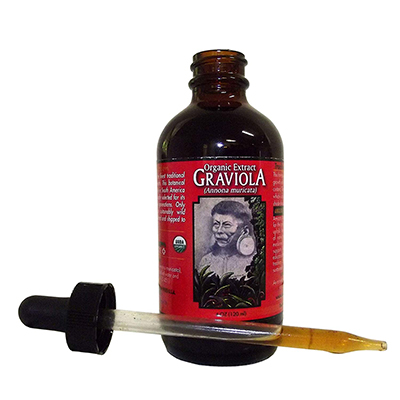 Q:
What is Graviola supplement?
A:

Therapeutic Laboratories Graviola is an herbal tincture that contains Graviola extract. The product is all-natural, with no additives. Recent research showed that Graviola extract has anti-viral, anti-bacterial, anti-parasitic, anti-cancer, anti-tumor, anti-fungal, anti-rheumatic, anti-hyperglycemic, and anti-inflammatory properties. Besides preventing various health concerns, the extract also acts as a mild sedative to calm the nerves, alleviate depression and lower blood pressure. The company behind this supplement is Amazon Therapeutic Laboratories.

Many scientists believe that Graviola is the new miraculous medicine offered by the Amazonian jungle. While the plant is still under research, the preliminary results are more than encouraging. Graviola extract has shown Effectiveness in dealing with a wide range of health concerns, from mild depression to malaria and even several lines of cancer cells.

We also need to point out that Therapeutic Laboratories is not the only company that offers a Graviola-based formula. Therefore, we advise our readers to first research into all possibilities.

This tincture has proven itself with a couple folks I know who have cancer. I don’t have cancer but I still take it as a supplement in the morning. My aunt had a type of a skin cancer, Category 4, and she did an extreme black salve at first which did extract the cancer out but very very painfully [but it didn’t stay away – it was found again throughout esp. in her lungs]…then she got on this Graviola Tincture and has been on it for a couple years, at least. She told me she had another screening a couple months ago and ‘they’ didn’t see anymore cancer!